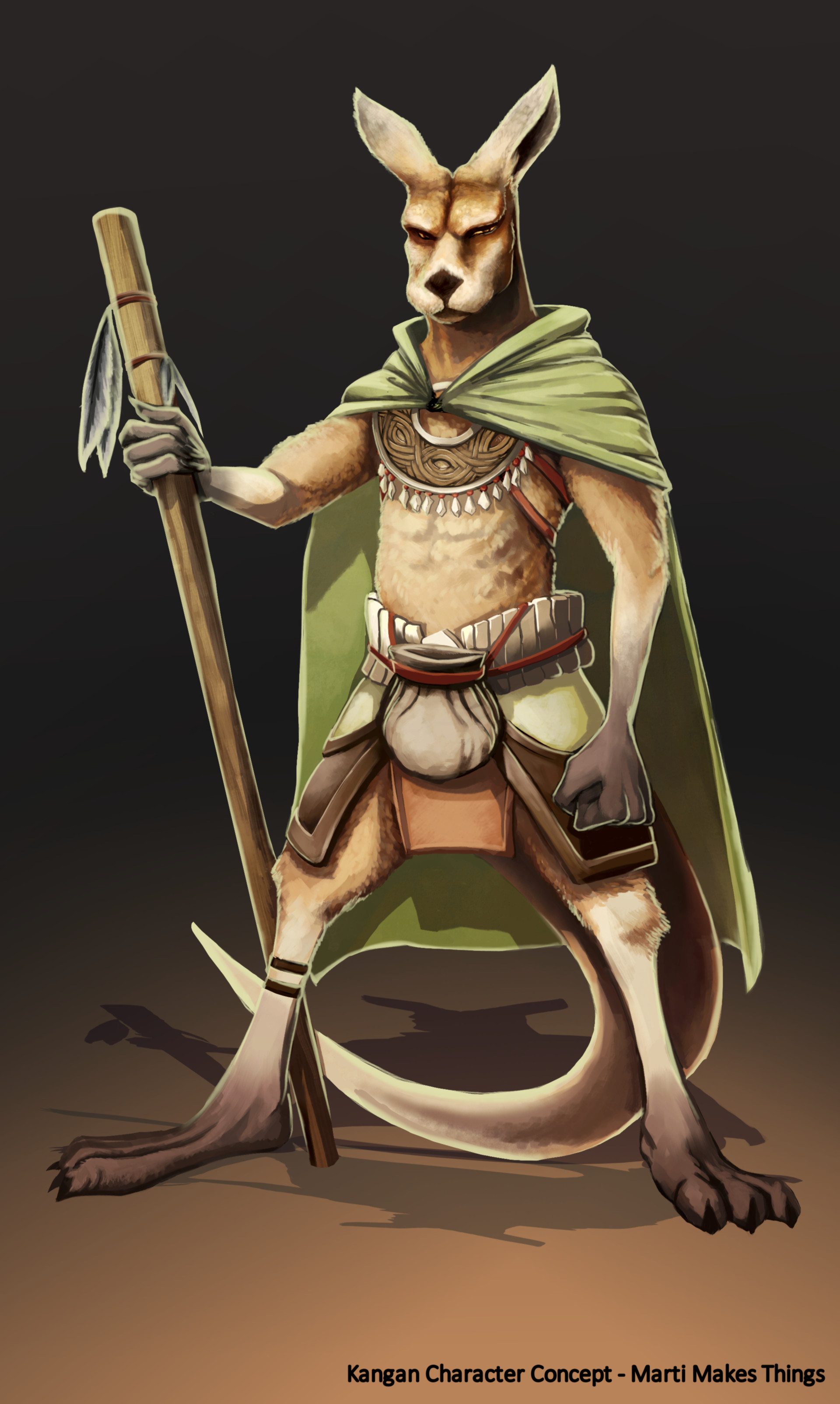 Kangu live on Animus, mostly in valleys protected from most predators. They have a tribal society similar to the Aborigines of Australia. They Kangu are a humanoid kangaroo; they are cousins to the Lepi. They evolved in rainforests, but left their protection to begin a hunter-gatherer existence on the plains.

Kangu were once high-strung herbivores with a, “hair-trigger” fight or flight instinct that favored flight. They developed sensitive ears and sharp eyes to more easily escape predators. Whether it was from lack of food, population or predatory pressure, no one knows. They now excel in the martial arts, so they could protect themselves from danger. Because of their muscular legs similar to a kangaroo, they are great leapers and use them in their natural kick attacks.

Kangu fur comes mostly in shades of gray and brown, but other colors are known. They are very prolific, twins are common and have few enemies. They are marsupials, like kangaroos.

Kangu are kangaroo-like animalfolk. Cousins to the Lepi, they like living on the plains or in forested areas.

These are anthropomorphic kangaroos. They have a more humanoid torso, better formed arms and legs like an amalgamation of a human/kangaroo structure. Their head is shaped like a kangaroo, but with more developed eyesight than a humans, a well-developed sense of smell, and a tail.

They are medium-sized, have broad shoulders, a marsupial pouch, large wide feet and a long tail. For those without young, it is often used for storage and can hold as much as an average-size backpack.

They are marsupials like their ancestors, the kangaroo. 1-2 young are usually born in the spring. They are similar enough to the Lepi to breed as well as to their cousins the Treekin. While it is possible to dally with the Wombu, their body structure is vastly different and would make it difficult.

Joeys grow quickly and leave the pouch after 2-4 months. Maturity comes between 2-4 years, afterwards males usually leave their parents house to join the other young bachelors in a barracks. Here they learn the skills that they’ll need as adults. After another 1-2 years they’ll compete for the favor of a female to take as their mate. Females usually stay with their mothers to learn the skills that she’ll need in the future.

Any temperate land, preferring grasslands and forests. Most live on Animas.

Kangu are strict vegetarians, they only eat plant life from the local area that they live. Mostly greens and root vegetables, that they prefer raw. They are constantly snacking, many carry something in their pouch at all times.

They tend to congregate in large groups and are rarely found in less than threes. These can be any mix of males and females. Like personalities drift together and often become mated trinities. Kangu go on group outings, to get to know their age mates. In this way they learn who is compatible. This starts in school and continues until everyone is in their life triune. Sometimes they form trial groups for 1 year to test their compatibility. When they are sealed together a physical, emotional and psychic link is formed that is only broken by death (not always even then).

Mostly on Animas, but also on Sylvania and Avalonia.

The are of average intelligence, but are very wise.

Their names tend to be combinations of words or concepts that describe the individual or events that have happened in their life. Alira-quartz crystal, alinta-fire, adina-voluptuous, beautiful; bunji- mate, buddy, friend, partner; ellin-wish, jarli-barn owl, etc.

Family, moiety, sept, clan are some of the common types.

Facial structures, colors and ears are all popular. Fur dyed in patterns and tattoos.

No differentiation of gender.

Kangu as a race are in the Bronze age and mostly are nomads transitioning into an agrarian developing culture. Some still roam, but most have decided to start growing food, setting down roots, to build houses and towns.

To help each other whenever needed.

A Kangu’s culture is similar to the Australian Aborigine, they are a loose confederation of clans and family groups. Led by a council of tribal elders and their shaman.

The Kangu mutated after drinking water from a lake that was contaminated in a battle on Animas during the Chaos Wars. It took many generations to cause the changes that their descendants currently have. Most are internal, like their intelligence and magic affinity. A few in every generation become Dreamwalkers: that are able to talk to the Rainbow Serpent on the Astral Plane; or Dreamweavers: sorcerers that are able to alter reality to affect change.

They are the closest to the Lepi, that live in more mountainous and rocky areas on Animus. Any good aligned races are their allies. Enemies are any vermin and the Atlanteans.